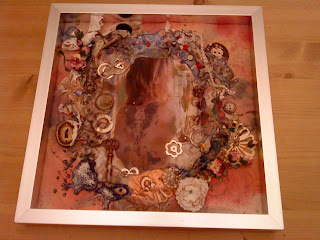 Hi all
what a great day yesterday. I did the project at Ali's craft club. Thanks all of you who did the project and some of you were surprised about how much you enjoyed it. A good thing. It had been a long time since I stood up and did a project so a little nerve racking but I loved it. Thanks again. As I was saying at the club Ali did a canvas with the melting pot and a wacky idea. She came through to my house and said right get your clothes off!!!!!! I have a few to say the least of tattoos and she had seen something online. So I went along with her crazy idea as you do!!! Felt like I was being cast in a pornographic photo shoot but all done nicely and not too many wobbly bits on show. The out come as you can see is a great canvas, we used the melting pot and threw alsorts into it. I didn't want a go at first but all the mess was very drawing and I ended up having loads of fun. The melted liquid dried very quickly and into it was (I would to say placed) threw keys,cogs,buttons and a mish mash of things. Then distressed using inks and perfect pearls. We had loads of fun and now the picture is hung up in the porch. It looks fab.
Love and bugsxxxxxxx
Posted by Unknown at Sunday, January 16, 2011 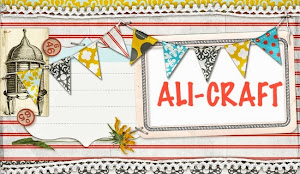 Click above to head to the Ali-craft shop to get the latest products that we can't do without!

To contact me or to enter the challange for those of you who don't have a blog, drop me an email and a jpeg picture of your card at:
angelart38@yahoo.co.uk